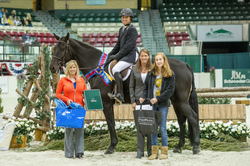 When Nick Haness stepped into the ring with Gelato for the WCHR Handy Hunter Challenge, he knew what he had to do.  Course designer Steve Stephens had set a handy track with a variety of options where riders could show off their turning skills and horses’ bravery. When he walked the course, Haness had eyed an inside turn toward the end of the course where there was a rollback turn to the in-and-out. A decorative tree was strategically placed, providing a tiny window of opportunity.

Haness took that opening, claiming the victory with scores of 92, 89 and 88 for an 89.66 average, which just edged Victoria Colvin and Listen, who earned an 89.16 average.

“The way the course designer had that tree down there set up I thought a lot of people would go close to it, like just go around it,” he noted. “And I said, ‘Win or lose this, I’m going to try the inside turn.’

“When I walked the course, a few of the riders looked at [the turn] and were like, ‘There’s no way.’ It was almost like a one-stride turn to get to the in-and-out from where you make that turn,” he explained.

Haness, 24, of San Clemente, California, has trained and ridden Gelato, owned by Conor Perrin, for six years and had confidence that because of their strong partnership the impossible was possible.

“I just met the jump before the turn perfectly enough, kind of slow, and he landed really nice and adjustable and the turn showed itself off. I just went for it,” he said. “I just sort of told him as we were going to that jump, ‘We’re turning here. We’re going to this, and I’m serious. There’s a jump right there.’ He was great and on it, and he just left the ground nice.”

Haness waited and watched the remainder of the class, but no one else tried that turn. Colvin’s bold yet smooth round aboard Listen came the closest, but Haness held on to the victory.

“This is an exciting win for me. I’ve not really had a lot of opportunities to show at Capital Challenge in the open divisions since I’ve been a pro,” said Haness, who owns and operates Hunterbrook Farms LLC. “I have a lot of junior and equitation riders here, but for myself I’ve not had a lot of opportunities. I’m working toward that. As a junior, I had a lot of success, so to be back here as a professional and have a win like this, it’s exciting.

“There was some good competition, top riders. Tori Colvin is hard to beat,” he added. “She’s slick! So, it was a really fun accomplishment for me. I’m proud of my horse, which is the most important thing. Every time I win with him it’s one more thing to add to our friendship.” 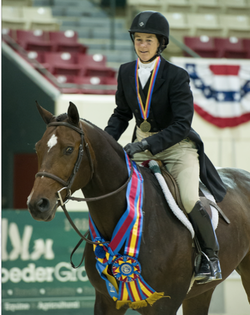 Debbie Kelly wasn’t thinking about winning the WCHR Adult Hunter Challenge yesterday when she woke up—she was just worried about getting through the day.

“I hardly remember it,” she said of the class. “I woke up with a sore throat and ear infection.”

In fact, Kelly had to dismount and sit down immediately after finishing her round, while trainer Rodney Bross escorted her mount, Say What, up the ramp. When her scores of 90, 89 and 91 flashed on the scoreboard, Kelly smiled in gratitude.

“I cannot believe that he just went around the way I feel today,” she said. “I was in the schooling area telling Rodney, ‘I’m not jumping any more fences. I might fall off or throw up.’ “

Kelly, of White Hall, Maryland, a practicing veterinarian, has a small collection of Thoroughbreds and homebreds at her own farm and takes lessons with Bross. One day he put her up on his own Say What, and it was the ideal match.

“He’s such a good horse. I just started riding him in June,” said Kelly. “He’s itty bitty, maybe 15.2 hands, this little brown horse. But he just goes after it. I just ride him when he’s available. It’s so cool.”

Bross saw potential in the partnership and asked Kelly if she wanted to take Say What to a show. “And I said, ‘Sure.’ That’s how it started,” she said. “I’ve shown him five or six times and every time I’ve shown him he’s perfect.

“I’ve had more 90s on this horse in this short couple months than in my entire 53 years,” she added laughing. “This one must be exceptional to watch as well—he must look as good as he feels. We’re just a good fit. He likes to be left alone, and I like to let them do their jobs.”

Although she’d shown at the Capital Challenge in previous years, Kelly had never competed in the WCHR Adult Amateur Challenge.

“I didn’t plan this at all,” she said with a smile. “I planned on coming and showing in the adults, and maybe I’d get a jog and it’d be fun. Any time you go around there, any time, anywhere you walk in the ring and nail one, it’s good.”

Wade and Scheriff-Muser Have Double The Fun 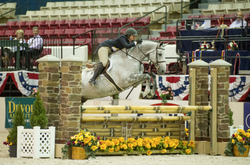 Marianna Wade, of Louisa, Virginia, began the sweep by taking top honors in the WCHR Amateur-Owner 3’3” Challenge aboard Castleton, owned by her family’s The Barracks. The pair earned scores of 87.5, 87and 92 for an 88.83 total, which just edged Nancy Hooker with Castlewalk, who scored an 88 for second place.

Wade hadn’t competed at the Capital Challenge since 1996, so it was a great way to come back. “I thought the class was great,” she said. “I went seventh. I found a lick and just kept going. He was amazing. I was worried that I’d spent all my jumps this morning and I was going to chip, but it worked out great.”

With two children, ages 3 and 5, Wade relies heavily on her mother Claiborne Bishop and sister Maria Shannon to help her with Castleton at home and during the shows.

“Her sister’s done a great job of flatting him and keeping him fit. It’s a family affair. Maria gets to do all the hard work, and she gets all the glory,” said Bishop laughing. “But, really, it’s a true team effort.”

“I think he’s exceeded our expectations because he and Tracy are such an amazing team,” said trainer Havens Schatt. “I think with me riding him, I don’t think he’d perform like he does for her. They are two peas in a pod, and when it’s time to show and she gets on, he just knows it. She trusts him, and he trusts her.”

Competing in the WCHR shows and working toward national recognition was one of Scheriff-Muser‘s targets this year, and winning the Challenge was an added bonus.

“A lot of amazing riders have won [the National Championship], and it’s really nice to be up there with everyone else,” said Scheriff-Muser, of Wellington, Florida. “It feels great to have met this goal, and it was exciting to have finally done it.”